The idea for the statue first came from Edouard de Laboulaye, a French political thinker, in 1865. He proposed that a statue representing liberty be given to the United States for its centennial birthday. It took a few years to get
started, but eventually a French sculptor, Frederic-Auguste Bartholdi, took on the task of creating the statue.

Bartholdi had help from several architects and engineers. The statue was built in France and presented to the American minister there. Afterwards, it was taken apart and shipped to America in 350 separate parts.

Would you believe that it took 214 crates to ship the Statue of Liberty across the Atlantic? Bartholdi traveled to America with his creation and oversaw its reassembly during 1886.

At around this same time, a woman by the name of Emma Lazarus wrote a poem about the many immigrants who have come to our shores in search of freedom. “The New Colossus” was donated to an auction raising funds for
construction of the Statue’s pedestal. Unfortunately, the poem did not raise as much money as auction planners had hoped. Along with a handful of other drawings and manuscripts, it sold for only $1,500.

When Lazarus died a few years later, her poem was considered so inconsequential that it was not even mentioned in her obituary.

The poem gained in prominence over time. Today, the closing lines of the poem have come to hold great meaning, especially for the many immigrants who came to America in the late 1800s and early 1900s.

In 1903, the poem was inscribed on a plaque and affixed to the statue’s pedestal. The poem closes:

Give me your tired, your poor,
Your huddled masses yearning to breathe free,
The wretched refuse of your teeming shore.
Send these, the homeless, tempest-tost to me,
I lift my lamp beside the golden door!

The Statue of Liberty was designated as a National Monument in 1924 during the Calvin Coolidge administration.

Oddly, you have to look pretty hard on the official Statue of Liberty website to find the text of the poem, or even very much discussion of it.

Please support Tara Ross, this blog is presented as a proxy to her work.
This Post
https://www.taraross.com/post/tdih-statue-of-liberty 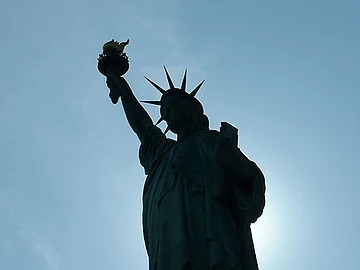