By Wolfenstein,
Tuesday at 02:28 PM in Breaking and Current Event Discussions 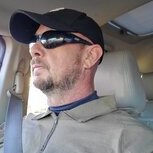 Copy that. This is not the hill to die on.