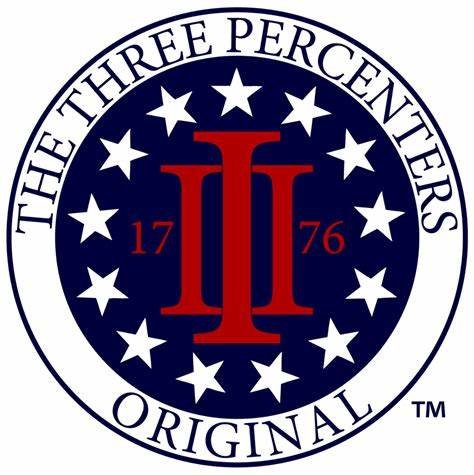 We are dedicated to help further the III%er’s cause, which will allow us to learn of other patriots in our state, and organize meet and greets on a local setting to discuss matters at hand. This group is designed to establish ACTION. Talking about fixing our nation has gone on far too long now. It is our hope that the state chapters will organize ways to fix our nation’s problems by petitions, gatherings, and assembly. Group Rules: -Be nice to your fellow III%ers. No name calling, insulting, and attacking other members. Doing such will get you banned. -Of course, no liberal trolls allowed in this group. They will be banned. -No posting nudity. This will not be tolerated and will get you banned. -Patriot-like posts are only allowed. -This group is not for trading or selling. Who we are: During the American Revolution, the active forces in the field against the King's tyranny never amounted to more than 3% of the colonists. Three Percenters today, for the most part, identify with this 3% because they were true patriots fighting for the freedoms the nation we love and honor was founded on. Three Percenters intend to maintain their God-given natural rights to liberty and property. History itself, for good or ill, is made by determined minorities. Never underestimate the power of a small group of committed citizens to change the world. Being a Three Percenter is a way of life. There are no membership fees. To live the life of a Three Percenter I would suggest you take the following Oathkeeper pledge: 1. I will NOT obey orders to disarm the American people. 2. I will NOT obey orders to conduct warrant-less searches of the American people 3. I will NOT obey orders to detain American citizens as “unlawful enemy combatants” or to subject them to military tribunal. 4. I will NOT obey orders to impose martial law or a “state of emergency” on a state. 5. I will NOT obey orders to invade and subjugate any state that asserts its sovereignty. 6. I will NOT obey any order to blockade American cities, thus turning them into giant concentration camps. 7. I will NOT obey any order to force American citizens into any form of detention camps under any pretext. 8. I will NOT obey orders to assist or support the use of any foreign troops on U.S. soil against the American people to “keep the peace” or to “maintain control." 9. I will NOT obey any orders to confiscate the property of the American people, including food and other essential supplies. 10.I will NOT obey any orders which infringe on the right of the people to free speech, to peaceably assemble, and to petition their government for a redress of grievances. Remember, we do not seek after violence, but if violence is ever called for, WE are the III% of the population that will stand and fight against a tyranny. Colorado Page: https://www.facebook.com/groups/336150943209614/  National page: www.facebook.com/threepercenters/ Website: www.thethreepercenters.org/ Store: http://store4220131.ecwid.com/simple-store Twitter: @ThreePercenters

Other links from 'Colorado Militias'