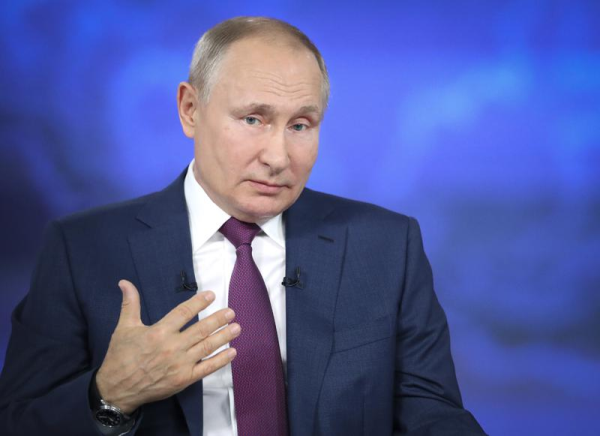 By DARIA LITVINOVA and VLADIMIR ISACHENKOV

MOSCOW (AP) — Russian President Vladimir Putin said Wednesday that a U.S. reconnaissance aircraft was operating in sync with a British destroyer during last week’s Black Sea incident in what he described as a “provocation” to test Moscow’s response.

Moscow said one of its warships fired warning shots and a warplane dropped bombs in the path of British destroyer Defender on June 23 to force it out of an area near the Crimean Peninsula, which Russia annexed in 2014. Britain denied that account, insisted its ship wasn’t fired upon and said it was sailing in Ukrainian waters.

Asked if the incident could have triggered World War III, Putin said that it was hardly possible even if Russia had sunk the British warship because Western powers knew they couldn’t emerge as winners in a global conflict.

Speaking during a live call-in show, Putin said that the U.S. aircraft’s apparent mission was to monitor the Russian military’s response to the British destroyer. He added that Moscow was aware of the U.S. intentions and responded accordingly to avoid revealing sensitive data.

In Wednesday’s incident, Britain insisted the Defender had been making a routine journey through an internationally recognized travel lane and remained in Ukrainian waters near Crimea. The U.K., like most of the world, recognizes Crimea as part of Ukraine despite the peninsula’s 2014 annexation by Russia.